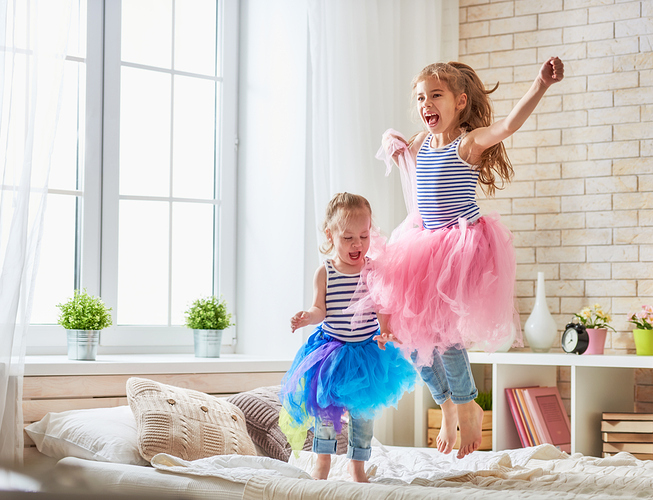 We are moving into a four-bedroom place soon, and can’t decide if the girls should share a room or not. What would you do and why?"

RELATED QUESTION: Thoughts on Kids Having a TV in Their Room? 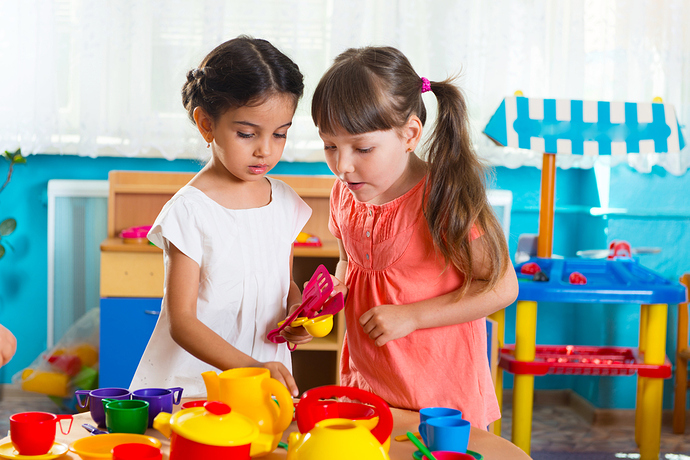 “As someone who has shared a room my WHOLE life if you have enough bedrooms for each kid I definitely say their own rooms. All I ever wanted was my own room growing up.”

“4 bedrooms… why not give each kid their own room in their new house to make it special?”

“Let them share the room as they are still young. When they get older they can move into their own rooms… I would use the extra bedroom as a toy/play room for the kids.”

“I personally believe a child should have their own rooms (if able) as I find they need a place where they can tell their other siblings to leave them alone or have toys that they don’t want to share in their own room.”

“We bought a 5 bedroom house and all 3 of my kids are still in one. Even though they all have their own rooms with brand new furniture and beds they are all still in one. But once they get older they will go into their own. But we also went from a 2 bedroom where they were all together.”

“My boys aged 5 and 3 are currently sharing as my daughter is in the nursery. We don’t have any other rooms for everyone to have their own. I personally hate it. The youngest like to stay up a little later and sleep in and the oldest needs earlier sleep as he gets up so early. They wake each other up. One snores and wakes the other. It has been a nightmare since we put them in the same room, I say separate if you can.”

“If they get along really well, I’d keep them together. I’d even ask them what their opinion is. My 4 & 5-year-old daughters have the option to have their own rooms but they choose to share! It leaves us with a guest room as well which is nice.”

“Ask them what they would prefer, and make a plan from there!”

“Everyone should have their own space if you have room. They can choose to room together but there should be space for them to be alone.”

“My girls each had their own rooms but then we realized they always slept together so we turned the additional room into their playroom! One room stayed clean and the other one-well it was a playroom.”

“Why don’t you ask them? At 3 & 4 they should be able to tell you if they want to share a room with their sister. Ask them separately in case one says no and feelings don’t get hurt.”

“I’d separate into their own rooms. Maybe upsize their beds to doubles. Or get single bunk beds. So if they wanna sleep together, the option is there to share the bed. Cuz with their own rooms they get their own space. Then if one is sick, it’s easier for them to rest and such. Or one isn’t keeping the other up, etc.”

Why do they need to share a room? 3 kids and you is 4 bedrooms…

Sure why not until they fight all the time

they may not be able to handle separate rooms right away

If I had enough rooms, I’d want all kids to have separate rooms .

We have a 4 bedroom house and my three boys share a room they arw 9 ,8 and 6 and my 2 almost 3 year old has her own room

Just ask them if both say yes then great if one says no then there’s your answer. Ask them separately thou.

I say each to his own room.

My parents had each kid in their own room

If there’s 4 bedrooms why would they not have their own space?

For now it’s easy but as they get older they may want their own space for sure.
I’d want my kinds in their own room and space though if I’m able to give that.

They’ll be fine. My one sister and I shared one until we were teens (we were the youngest two). There were 5 of us kids and not enough rooms. Once siblings moved out, we had had finally had our own rooms.

I have a 4 bedroom with 5 kids. My 8 and 4 year old share a room and my 15 and 10 year old share. My son has his own. 3 of the bedrooms are the same size. Just as big as the master. My sons room is small but perfect for one

If they r use to bring in the same room do that til they get use to the new place. Then slower move them

Personally I hated sharing a room with my sister. I don’t make mine share.
It’s eaiser when their fighting, grounded or when they have friends over.

I would have them share until there older , the boy and you guys can have your own room and a guest room for 4th room . That’s how I grew up

I honestly enjoyed sharing a room with my sister growing up made us closer . But should as them and if anything make the spare bed room a play room for all the kids