My Ex, Who Has Been MIA for Almost 3 Years, Is Suing Me for Full Custody: Advice? 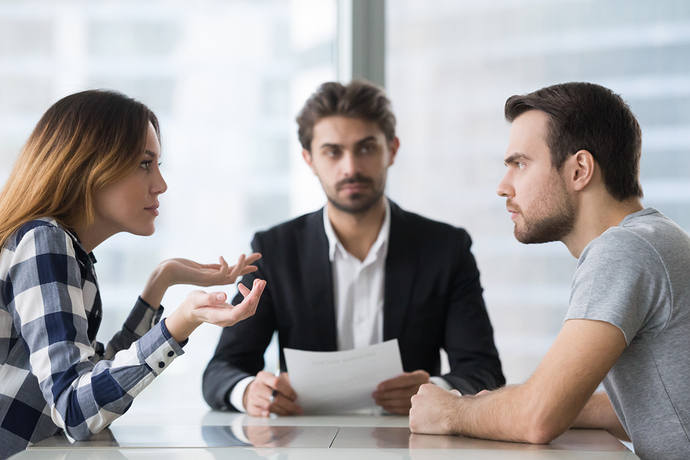 "My eldest son is 2 and 9 months. Almost 3. His father left during pregnancy. And continuously told my friends and me that the baby wasn’t his and wasn’t physically capable of having kids.

He called me names and was rude up until like two weeks before my son’s birth. I didn’t inform him I was in labor, but I sent him a photo afterward (he lived in Mississippi at the time, and I live in Texas).

He came and saw my son when he was a month old. And he saw him once when he was about a year and a half. In total, he’s sent $400 for “child support” I’ve never taken him to court. I truthfully just wanted him to leave us alone. I never put him on the birth certificate. But I also allowed him to come to see my son if he asked.

Well, a month ago, he talked my parents into helping him move out here. He’s currently living with them. My dad got him a job. And then a couple of days ago, I got served papers because he is suing me for full custody of my baby!!!

I know he has almost no chance of winning. But I’m so scared. I love my baby so much. I can’t sleep. I feel like I need to just hold him 24/7. Has anyone had to deal with this before?"

RELATED QUESTION: Am I Wrong for Wanting to Meet My Ex’s Girlfriend?

“Get a lawyer and prove abandonment and neglect. If anything he will get visitations bc he is a stranger to the child. And I just have to say you definitely have some garbage parents for them to be helping him out. Js.”

“It sounds like there may be more to this story. Why did your parents help him? Was it because they thought your child deserves 2 parents or do they think you are unfit? I’m not trying to be rude, just trying to understand the whole story.”

“For those saying, ‘there is more to the story because her parents are helping him’, congratulations you have never dealt with toxic, controlling parents. When they can’t control you with money or fear, they for sure go after your weak spot that is your love for your kid. Don’t assume all parents have their child’s best interest at heart. OP cut your parents completely out of your life.”

“If he’s suing for custody it doesn’t matter that his name isn’t on the birth certificate because the court will rule on a DNA test. Once it’s ruled that he is his child then yes, most likely they will allow for a slow introduction. First, most likely, starting with supervised visits with you & then moving forward from there. A lot of states want a child to have both parents present and so they will most likely give him an opportunity. I highly doubt they would give him full custody unless he can prove you are unfit. As far as living with your parents, that does not matter. He still has a roof over his head and a job. If anything it will show he’s made an effort to be introduced into your sons life because he moved states to be closer to him. Just make sure every form of communication is via text & write a log of every interaction. Date and time everything that you handwrite. A detailed log plus text to back it up is extremely difficult to argue against in court.”

“Definitely need to hire a lawyer hun. And I’m so sorry you’re going through this. He’s going to have to prove you unfit for full custody to be awarded and it doesn’t sound to me like he’s going to be able to do that. However, depending on the judge you get and what his lawyer asks for, you may be looking at visitation rights of some sort. Good luck dear! I’m rooting for you! It’s not fair when they think they can just be “dad” whenever they want.”

“Mentally emotionally abusive, abandonment, no medical or financial support, no visitation, no paternity, no name on birth cert, no proof you’re an unfit mother. He will get visitation once paternity is established and you’ll get child support. That’s probably as far as it’ll go. Also, any conversation you have with him or with your parents about how the situation needs to strictly be about the baby. That’s it. I understand it’s a scary and stressful situation but you have to do your best to keep conversations limited and keep it together for yourself and your child. I hope it all works out for you and your baby.”

“He won’t get full custody. The first thing he needs to do is prove via paternity test he’s the father. The only way a court would grant him full custody is if you’re an unfit mother. Honestly don’t worry too much about it. I’d be more worried about the fact your parents are helping him not you.”

“Unless you have some drug or drinking issues or abuse your child, he will not get sole custody. I have a feeling you are bit telling us the whole story, why are your parents helping him? Do you have a job? Place to live? Transportation? You need to get a lawyer.”

Definitely need to hire a lawyer hun. And I’m so sorry your going through this. He’s going to have to prove you unfit for full custody to be awarded and it doesn’t sound to me like he’s going to be able to do that. However, depending on the judge you get and what his lawyer asks for, you may be looking at visitation rights of some sorts. Good luck dear! I’m rooting for you! It’s not fair when they think they can just be “dad” whenever they want.

Your parents are helping him do this???

Get a lawyer and prove abandonment and neglect. If anything he will get visitations bc he is a stanger to the child. And I just have to say you definitely have some garbage parents for them to be helping him out. Js.

My soon to be ex husband has threatened to take the oldest of our two children from me.

Shame on your parents for helping

It sounds like there may be more to this story. Why did your parents help him? Was it because they thought your child deserves 2 parents or do they think you are unfit? I’m not trying to be rude, just trying to understand the whole story

No way he will get full custody with his lack of involvement. He would have to prove you are are an unfit mother for that. I doubt he can even get 50/50 with the basic abandonment of the child this long.
You can even request supervised visits until the child is comfortable.,
Child support ect…

Oldest story in the book. You guys will go to court and he will either get supervised visitation or 4-6 hours every other weekend for probably 6 months. Then maybe a week end over night. Then eventually maybe 50/50. I mean if he proves himself this is great for your child. If he isn’t on drugs and isn’t violent then let him be a dad.

Why are your parents helping him

First question why is YOUR parents helping him?

all of this is not as easy as it seems. you did good by not putting him on the birth certificate. He has no parental rights. so he has to get the court to allow him to get DNA test. Once thats done and positive if he wants to claim the child that means his name goes as the father onnthe birth certificate. once that happens. you are able to nail him with back child support. im not sure at what point its considered abandonment before or after the dna test

I think there is a big part of this story that is missing. Why else would her parents help him?

Why exactly are your parents helping HIM??? I feel like there are more details to this story that have not beendisclosed

Lawyer up. Say if he wants any visitation it needs to be supervised because he has abandoned your child. Its been over 5 years for my children since they seen their father and the courts will let him see his children but my children are all old enough to decide if they want to see him. Unfortunately yours is not and they will give him visitation. Once he’s done with his supervised visit schedule then more time will be added, but he will not get full custody. What a laughable notion he has! And I can’t believe your own parents are condoning this! I’m appalled. I hope to for your sake they don’t know he filed like that and are just trying to be good people by helping out the father to their grand baby, but how disgusting especially since he didn’t seem to want a child. And first of all since he isn’t on a birth certificate he has to establish paternity anyway. Oh go for child support once he has established paternity. It doesn’t have to affect you at all. Its just a little something that can help you with raising your child.

Maybe her parents are assholes??? She asked for advice on a case not your opinions on her parents. She’s been the one supporting him, at best he will probably get visitation.

U need to cut ur parents off, how dare they. They sound like mine and nothing good happens !! Get a lawyer. But he doesnt stand a chance.