What brand of bottles should we use?

My daughter is three months old and has Gerd, Severe acid reflux, And strider, which makes it difficult to feed. We currently use Dr. Brown’s bottles, but she is still getting too much air in. I need suggestions on other bottles that really cut down the air intake for her. Any suggestions are much appreciated.

Are you shaking the bottles? I have to stir mine good and then put the lid on.

I tried all the fancy anti colic/anti air bottles. My son ended up doing best on the cheap Walmart brand regular bottles. Wasted a ton of money buying expensive bottles and those cheap ones ended up causing the least air intake and the least amount of reflux symptoms.

We use Difrax, not sure about availability globally though.

If you shake you have to let it set for 5 min and take cover off and back on before giving. Dr brown is one of the best. You could try the drop ins and push air out of the bag before giving

I’m not sure I found any bottle that helped that. My pediatrician said that babies don’t have the stomach and esophagus developed well enough to prevent spit up and that acid reflux for most babies will relax after 6-8 months, particularly after starting solids. It’s normal for it to occur, but if she is in pain often like my baby was, you can get an antacid prescription to help with the discomfort. Right now my daughter is 5 months old and has been on Fomatadine, .5 ml a day. It has helped so much with her discomfort and while she still vomits or has reflux, it has helped her discomfort. We also use Como Tomo bottles, but that was simply because it’s silicone and was an easy transition from BF to formula. We also switched to Similac for Spit Up with rice starch which helped a bit (no cereal).

I LOVE Maam. Come completely apart, microwave sterilizable, easy to put back together.

Advent was great for us. I had a colic baby for 4 months

Lansinoh are wonderful! You can get them on amazon. For my daughter they where the only ones that worked. They also have slow, medium, and fast flow bottles. 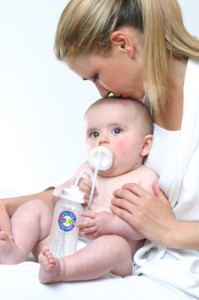 Mam was the only thing that worked well with my son, besides switching his formula 8 times I think we switched bottles 10 times

Everyone’s wrong!! Its comotomo bottles! That is gonna be your TOGO bottles por vida

Use MAM ! Best brand ever!

Not sure if you guys use gas drops (mylecon?) But whenever I have my babies bottles I had to put a couple drops (1 or 2) into a bottle and then shaking does not create foam or bubbles. Helped mine. Though mine didn’t have any medical struggles so I don’t know if it will be helpful

We use Tommy tippie and love them

Also, feed her on her side. My son had the same problem and was admitted to the ER. They used Dr. Brown bottles and feed him on his side. He started to keep his food down.