Bill Horn and husband Scout Masterson are well known to many fans of Tori Spelling’s reality show Tori & Dean as “The Guncles” (that’s short for ‘Gay Uncles’ if you didn’t know). The happy couple are proud parents to two children, Simone (10) and Bosley (5, but almost 6), whom they adopted

In honor of Pride month — and our everyday commitment to sharing parenting stories, information, and advice from a diverse roster of sources — we sent Bill and Scott six parenting questions to get their unique perspective on being dads. Check out their answers below!

YOU MAY ALSO LIKE: 5 Celebs Who’ve Supported Their LGBTQ+ Kids Proudly and Publicly

6 Parenting Questions with Bill Horn and Scott Masterson, aka “The Guncles”

What was your journey to parenthood like? What obstacles did you need to overcome?

Our journey to parenthood was a wild ride. Both our kids (Simone, now 10) and Bosley (almost 6) were the product of open adoptions. Looking back years later, Simone’s adoption was a dream. We met a truly amazing birth mom, connected immediately, and welcomed Simone only 3 months after “matching”.

Don’t get us wrong – we were an emotional wreck. How do we find a birth mom? Now that we found one, will she like us? What if she changes her mind? We also had to deal with a homophobic hospital that tried to change our birth mom’s mind days before she gave birth. So it was a lot, but looking back it was amazing.

We had an equally amazing experience matching and meeting Bosley’s birth mom.   What followed was, unfortunately, a lengthy, emotionally draining, and expensive legal fight with his birth dad, who had initially agreed to the adoption but changed his mind after being released from jail. This was all after Bosley (aka Boz) was born. After he had become part of our family. And after his new sister had fallen in love with him. There was no turning back.

After more than 2 years of fighting and pleading, the issues were resolved. It was a long, tough road, but we made it.

How is being a queer parent different? In what ways does it come up for your family?

In so many ways our family isn’t any different than a non-queer family. We only realize people might think it’s different when they bring it up.

Best parenting advice you’ve received and from who?

A good friend told us that sleep is the best gift you can give your kids and yourself. They just function better with a good night’s sleep. Sometimes bedtime is a battle, but it’s a battle worth winning.

How do you (plan to) talk to your children about issues facing LGBTQ+ people, parents, youth?

We of course have incorporated a ton of LGBTQ+ books into their libraries. Everything from gay penguins to stories about gay dads. We handle any conversations that those bring about with honesty. And we watch Drag Race as a family because that’s just educational!!!

What advice do you have for other LGBTQ+ parents who either have children or want them?

If you want kids, go for it. But start researching your options early. There are very few unexpected queer pregnancies. So do your research so when you’re ready, you won’t be starting from square one.

What advice do you have for children of LGBTQ+ parents who may encounter discrimination/bullying because of their parents?

Our advice is to first approach every situation with comparison and try and educate. Think about those in your own family who haven’t always been on the right side of history. Also, be open and honest with your kids.

If that doesn’t work, then deal with it in a calm, but forceful manner. You and your children have every right to live in a world free of discrimination and bigotry. 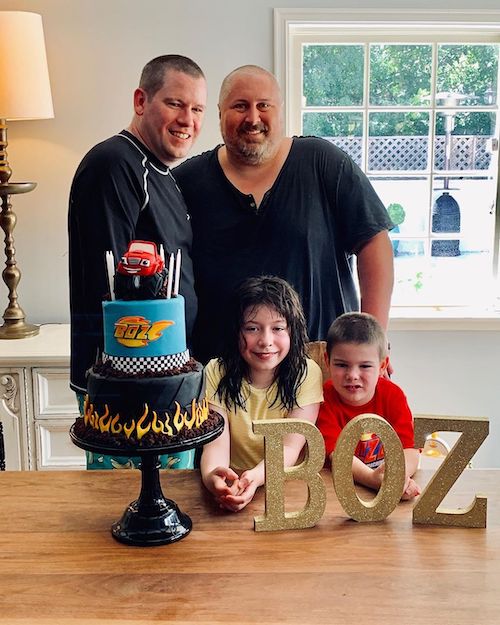 Bill Horn and Scout Masterson live in the LA-area with their two children, Simone (10) and Bosley (5), and their three dogs, Minnie Mouse, Stanley, and Moira Rose.  For the past decade, they have run a successful boutique PR agency called Marque Communications that specializes in baby and kid products and celebrity family events. Some might recognize the longtime couple as “The Guncles” from the reality show “Tori & Dean: Home Sweet Hollywood”, which they appeared on for 6 seasons.